Hey readers! It’s time for a dose of site news! And while there was an order to things in the title above, the first thing I’m going to do is toss that aside, because the very first thing I have to talk about, that I want to talk about is that there’s a new episode of Fireteam Freelance tomorrow!

That’s right, tomorrow morning Underground Orbit drops on the site, as the team picks up a new mission that requires them to take on a very different approach while … naked? Who’s paying for this, and why are these missions getting so strange anyway?

No matter what, though, it’s sure to be not what you expect! So tomorrow morning be at the ready! Episode three of Fireteam Freelance is here at last!

Naturally, this does mean that the time has come for me to start going over responses from Alpha Readers for A Trial for a Dragon. The submission date draws ever closer, and there are definitely changes to make in these next few days, so that’ll be my next move, starting today. At this point a good number of Alpha Readers have finished it, so the draft is full of feedback comments which I’ll start working on today. Once Trial is shifted, depending on how much rewriting was done for the feedback, there may be a fast and aggressive Alpha 2 before darting to Beta. We’ll see how confident everyone is in the changes I make.

This all said, one thing I have gathered from the feedback thus far is that the Alpha Team is really enjoying the story even with the things that need tweaking and fixing. Especially the way the ending plays out.

A number of them have expressed a real interest in the setting … which means it’s now time to plug my short A Game of Stakes found in the pages of A Dragon and Her Girl, because they’re the same setting (though a few years apart)!

Now, quarantine chat! I started doing these this week (and they’re not dead) but I just wanted to give you readers the tally for this week’s most successful post by far: Colony – The Film (or Show?). 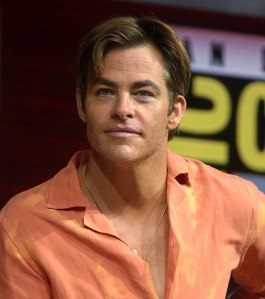 There’s been a lot of comments on this post (and if you haven’t read it yet, you should) with some great ideas about how to pull off a Colony series (or show, or movie). I think that the idea from PaulAsaran of having Chris Pine play Jake Tames is perfect. He’s an actor that could carry it off!

That’s a picture of him from Wikipedia there on the right, by the way. Now just imagine him being a corporate investigator, having a fear of water, and wearing a blue dive suit.

I think he’d make a great Jake Tames. Of course, I’m still firmly in the live action camp, though some commentators really wanted to see what an animated Colony series could look like. And I can’t disagree there that it would have its own strengths. Modern animation has made some massive strides in how cost-effectively dazzling color and scene can be done. Something Colony could well use!

That said, I’m still in the live action camp. And Chris Pratt as Jake Tames was definitely an inspired idea.

Another suggestion that caught my eye in that chat post was Zoe Saldana as Annalyne Neres. That’s her in yet another Wikipedia picture there on the left. Of course, most of you probably know her as Gamora from the MCU’s Guardians of the Galaxy.

She could do it. As was pointed out in the comments, she’s already got plenty of experience playing a hard-edged augmented mercenary, so the association is definitely there!

I still like the idea of Emmy-Raver Lampman playing Anna though. She’s young and fresh (movie-wise anyway) but everyone needs a breakout scene, right?

On that note, I was kind of surprised that no one had any thoughts on who’d play Sweets! Poor guy!

However, there was one thing that came up over the course of the comments that was honestly just perfect:

Benicio del Toro as Rodriguez. That’s him there in another Wikipedia picture on the right. Some of you might be thinking “Who?” but for those of you that know him …

Come on. Put him in a flannel shirt, make him look a little tired, but determined to bring Pisces out of UNSEC control … and he’d be perfect. Can’t you just imagine him sitting across a table from Jake, Anna, and Sweets explaining with del Toro’s cool manner that blowing up the refueling station after they used it was justifiable despite the thousands of civilian casualties?

I think he’d be perfect.

There was also a suggestion of Stephen Lang as Admiral West, and I’m not going to lie, while it might be a little typecast given his role in Avatar (the blue people one, not the Nickelodeon show), he would be a good fit for the spot. I’m not even sure there’d be much need for makeup. Just a uniform and the right expression!

Seriously, this post was a lot of fun, as was reading the comments and ideas people had for who could play who and envisioning those actors in the roles. Definitely something to make life a bit more fun right now.

And who knows? Maybe one day it’ll happen, and we’ll all get to see Colony as the newest Amazon Series (which … is actually pretty possible given their recent commitment to being the Streaming service that makes the most Sci-Fi content. Hey, anyone fired them an e-mail on that?).

In the meantime, if there are other actors you think could play the roles (we’re still missing fan-suggestions for Sweets!) get over to the original post and comment away!

All right, one last bit of news. This weekend I’m going to be a little busy, so I won’t be doing any editing or work on Stranded (yes, I still remember that’s a project) tomorrow.

Why? Because twice a year my faith holds a massive conference. Well, not a conference like most think of. More like a giant gathering, mostly digital (given the numbers involved) where the leaders of my faith speak on various topics of faith, the Savior Jesus Christ, repentance, and the Gospel of Christ in general. Which is a pretty massive topic, all said and done. So I’ll be watching that this weekend.

Granted, it’s going to be entirely online this year due to the pandemic. Normally it’s streamed, but hundreds of thousands descend on the conference center building itself to attend, but this year thanks to Covid-19 it’s all digital.

I always watch it from the comfort of my home anyway, thanks to streaming services. If you’re curious about it, you can watch it on Youtube, streaming tomorrow in the morning and afternoon, and then same times on Sunday (different speakers and topics each time though).

Honestly, if you’re looking for something to take your mind off of everything going on with the pandemic (and everything associated with it) I’d highly recommend it. There’s absolutely something to be gained, though what that might be in each individual case I couldn’t say. But you’ll get something out of it, that much I can promise you. And hey, it’ll give you something to do after you finish the newest Freelance episode.

Anyway, there won’t be any work on Stranded or the Trial Alpha for that reason. I’ll be feeding my spiritual side.

See you all Monday for another edition of Being a Better Writer.