Hey readers! This will be a short one, as I am bushed, but the first day of LTUE (Life, The Universe, and Everything) was today! So, naturally, I’m here to give you the session reports. Though it may be a little tricky as I was on a number of panels this time, rather than listening from the audience. Plus there was this book launch …

Yeah, if there’s typos here I apologize, but I am exhausted. This day was awesome, but it did wear me out by the end. 10+ hours of con will do that to someone.

So, let’s start with 9 AM and the first panel I attended, or rather, gave! That’s right, I was one of the panelists for it! The topic was on using weather properly in fiction, not just as a backdrop, but as something that could influence the plot and characters! And it was a lot of fun, though early lol. We discussed how different forms of weather can completely change a scene (such as an escape from a prison camp in sunlight, hazy rain, or fog), how to set up weather in advance so that it doesn’t come out of nowhere, and even ways you can learn about weather or help establish the mood for your writing. A fun panel that definitely got a lot of audience members thinking.

At 10 AM, I attended a panel on lost technology. You know, stuff like Damascus Steel or Greek Fire. However, I was pleased when the panelists subverted what I (and I expect many others) predicted would be the focus, instead focusing on lost modern technologies that we still have record of, but no longer have the ability to create, such as Saturn V rockets, or mechanical calculators. Both of which, the panel pointed out, we don’t have a need for (which is why they’re gone), but they’ve gone so hard that we have the blueprints to create them (mostly), but not the expertise or machinery.

An interesting approach, and one that left me thinking on progress.

At 11 AM was the keynote for the day, a presentation of Fantasy in art through the ages. Interesting, and with some fun art.

At noon I meant to go to a panel on tweaking the human genome, but ended up becoming involved in a spirited discussion in the Green Room about the future of publishing and indies. I’ll make a side note here. I am astounded by the number of authors at LTUE that are, like myself, indie. There’s a lot more than I recall being in previous years, many of them well on the path to success. There have also been more established upsets with long-time trad pub authors ditching their publishers to go indie.

I won’t got into all the details here, but one thing these discussions made clear was that indie is surging where trad is, well … staying stuck in the past and not adapting nearly quick enough. I should probably write more on this once the con is over, but while the future appears to be tumultuous … Trad Pubs can’t fight the future. No more than movies, music, or games could. Indie is building like a tidal wave.

1 PM marked the next panel I was a presenter on, this one on the differences of magic in rural places than a large city. Now, I went into the panel thinking “small town versus city differences in who you talk to and logistics (like getting ingredients)” but instead, we ended up talking about rural folklore, ancient and modern, and how you could use those  to build a story. Which brought up some interesting discussion points, some outrageous—like how spam calls could in fact be the work of wizards—and some subtle—like the small habits and colloquial things people do to ward off spirits.

2 PM was “The Introduction of Artillery to the Battlefield” and this was one of those panels that’s just cool to listen to. Artillery, from its first inception and use, to modern cannons and rockets. From people who’ve fired real artillery in combat situations, no less.

Dang cool to listen to. And idea-generating …

3 PM, however, was the big one. And I’ve got pictures. Because 3 PM was the official launch party and signing for A Dragon and Her Girl. 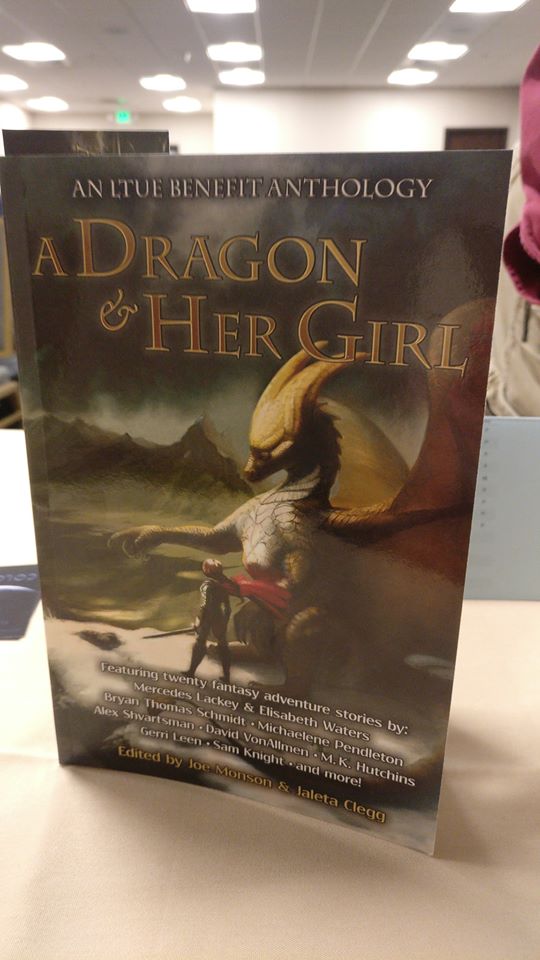 Wonderful! If you’ve not grabbed a copy yet, hit this link. Beside my own story, there are 19 other stories about dragons and heroines in these pages.

All in all, a great experience.

At 5 PM, I had my final panel of the day: Subverting Tropes to build your Sci-Fi story. This panel meandered a bit; we ended up talking a bit about prologues and epilogues, as well as dabbling a bit into fantasy, but overall we discussed what tropes are and how you can use what the audience expects to subvert that expectation while still playing the trope straight. One thing that was discussed I’ll rerun here is that if you know how most stories are using tropes, you know what people will expect and have clues to how you can subvert them.

With that said, I am bushed and need to crash! Tomorrow, readers! Hope to see you at LTUE!