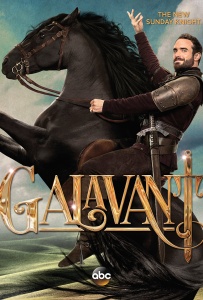 Today’s post doesn’t have much to do with reading. The title, admittedly, gives that away, but I’ve been around long enough to know that sometimes even I skim over a title in my haste to read the article (and surely, I can’t be the only one?) so … Yeah, today’s post isn’t about a book. Or a series of articles.

Now look, I promise I won’t do this often. Mine is a site dedicated first and foremost to writing and fiction.

But … sands and storms did this show never get the credit it deserved. At all. Personally, I think it had somewhat to do with the medium. Premiering on a cable network that likely had no idea what to make of it, it seemed a hard sell on an audience that is shrinking by the year (cable TV). I suspect that had Galavant shown up on some other network, like Amazon or Netflix, right off of the bat, we might have seen three, four, or even five seasons rather than the meager two it ran on ABC.

Why? Well, personally, I’m not sure execs knew what to make of Galavant. Or the general television audience. It’s … not a normal show. It’s a show that would stand out perfectly on Netflix or Amazon as a show that’s made for an audience that’s always looking forward. But for a more traditional, status-quo seeking cable network audience? It’s kind of a hard sell.

Okay, enough beating around the bush. What is Galavant? Well … are you ready? Galavant, as I would describe, is:

*Inhales* A musical, meta, fourth-wall aware, fantasy comedy. And yes, I mean musical in the sense that everyone breaks out into song and dance with astonishing regularity. Several times per episode, actually. And they’re aware they do it (see the “meta” tag). Sometimes they’re even aware that there’s been a commercial break, or that most viewers only Tivo the show for later and aren’t watching it live (fourth-wall what?).

Sometimes. They don’t overdo those elements. They’re nodded at, joked at, poked fun at, but Galavant isn’t a show where all the jokes come from those meta, fourth-wall moments and nothing else. No, instead they’re woven into a fount of clever dialogue, goofy characters, and—of course—the songs.

The songs are easily some of the best highlights, especially by season two where the writers really hit their stride. They’re clever. They’re funny. They’re catchy. They feature guest stars in plentiful numbers, from ‘Weird Al’ Yankovic to Ricky Gervais and Nick Frost, but they’re also from a wide range of show and stage. You’ll see a large variety of styles of musical theatre shown off, such as a dwarves VS giants rendition of a West-Side Story snap-off.

The plot and characters are nothing to sneeze at either, especially as the writers seem to gleefully subvert every single cliche and trope they come across—if they don’t play it straight just to make it all the funnier. It’s almost impossible to guess where the next episode will go until it actually hits, but you never feel like the characters are meandering or floundering thanks to the infectious energy the actors infuse them with. You can tell they’re having fun, and whether it’s King Richard getting drunk and enacting a drunken “secret mission” through his own castle which his guards just pretend to ignore, or the protagonists of season two being captured by an “evil queen” who runs a gay bar in the enchanted forest and chains the hero up shirtless behind her bar to sell more drinks, you’re always snorting and laughing along with the characters as one funny event hits after another.

This is a show where you can tell the cast had fun. I couldn’t even guess how many times the cast broke down laughing on set, but it couldn’t have been an insignificant number. They’re simply having too much fun together, especially by the second season.

It doesn’t hurt, either, that the show’s episodes were kept short and tight, clocking in at only 22 minutes a pop. Or that the writers admitted up front that they made up each episode as it came, asking themselves what they felt the cast would do next based on their characters rather than shoving for some huge plot that pulled the characters along. The result is that each episode feels snappy, character-driven, and, of course, funny. The characters are endlessly quirky, some of my favorites being the evil wedding planner (and assistant) from season two constantly having a bit of confusion over the wedding plan, the evil plot, and the color scheme. Or Queen Madalena’s hilarious … actually, I won’t spoil that. Let’s just say Galavant takes the “save the princess cliche” and in the opening minutes of the show kicks it between the legs so hard that the plot is still reeling from it in the season two finale. To wonderful effect.

It’s short. It’s snappy, and it only has eight episodes a season, all of which you can watch on Netflix. Is there hope for a Netflix revival? Well … not really. Unfortunately, Galavant never really found a very wide audience in its run on ABC, and so it stands on Netflix as one of those hidden diamonds that you occasionally stumble across and then wonder why there are only two seasons of it.

But man, what a diamond it is. If you’re the type of person whose eyes slowly lit up as you heard the phrase “musical, meta, fourth-wall aware, comedy fantasy,” then you absolutely need to do yourself the favor of watching it. It’ll go past astonishingly fast, and before you know it you’ll be done with season two and wondering if the world could ever see a revival.

But hey, if you’re still on the fence, that’s fine. Just take a look at the season two opener below (beware some massive spoilers for season one!), laugh, chuckle … and then give the show some love on Netflix. It’s a gem that shouldn’t be missed.

See you all Monday!

3 thoughts on “Why You Should Watch … Galavant”