All right, people! We’re only a few days away now from the start of the first round of the Rolling Sale, which begins July 17th. That’s right: This coming Monday! Prepare now!

What is a rolling sale? Good question! It’s a domino effect sale, really. How it works is that one book starts out on a discount of some kind, and then the number of copies it sells determines the coming discount of the next book in line. The better the first book does, the deeper the discount for the second title, all the way down to free. Then, once that book goes live with its part of the rolling sale, its sales then determine the discount of the next book after that, and so on until every book has been given a spot on the list.

What’s this mean for you? Well, it means that the better a book does during its time in the spotlight, the better a deal you’ll have when the next book arrives. So you want a book to do well.

But … what if you’ve already bought the book in question? After all, One Drink, the first one in line, has been out for years, and it’s not exactly expensive to start with. Are you out of luck?

No. A sale is a sale (even if it’s a free copy). But so that those who’ve already grabbed a copy can still get in on things, I’ve added an additional rule: A review of the book on Amazon or Goodreads will count as 10 units moved. So if you’ve already bought the book, you can still do something to kick that counter up for the next title.

Additionally, sharing the book can help out too. If you post a link on Facebook or Reddit and three people grab it, that’s three more sales towards hitting the next tier for the next book. Even KDP reads during this time will count towards the total number, so that those with Kindle Unlimited accounts can help out as well. Each read complete through KU will count as one sale, though this will put the readers on a bit of a clock to finish things before each deadline!

Okay, so, we’ve got the basics of how this works down. Now the question on everyone’s mind: What are the tiers? What sort of numbers need to be reached? What book is going to be available at a discount next week? What about after that?

Good questions. Let’s answer them! The first domino in this rolling sale is none other than One Drink, the Urban Fantasy-Mystery novella that was the first thing I ever released! Now, One Drink is pretty inexpensive at the best of times anyway, being 99 cents, so there’s not much further down it can go than “Free.” Which it will be, starting next Monday and running through Friday. Yup, entirely free. No charge.

Remember, though, if you already have it, leaving a review for it counts as 10 sales. Or if you’re really extreme and haven’t bought it, buy a copy, read it, and then leave a review, for a total of 11 sales. But that’s pretty dedicated. You don’t have to do that, but you could. No one would complain, I imagine.

Especially as this would further everyone else’s goals in helping move the next title in line to the next sales tier. 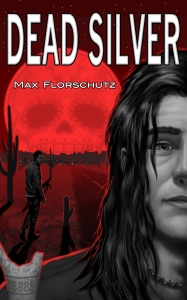 Now, for Dead Silver, there will only be three “tiers” of discounts. This is 100% because Dead Silver is already a pretty cheap title due to its “Heroic” status, putting its price at $2.99. There’s not much lower it can go. So for the start, here’s where Dead Silver will be. Or, in other words, let’s talk how many units One Drink needs to push in order to make Dead Silver drop!

Right, so this is the basic level that Dead Silver will start at. Even if One Drink moves so little as zero units (which, given how math works, is pretty much a certainty), then Dead Silver will drop from $2.99 to $1.99. That’s not a bad savings, really. 33% off. But then, it could go lower.

For many, this is more like it! Once One Drink has moved more than 200 units (again, not unfeasible at all, as I’ve got the numbers from prior sales and promotions, so I know what it can move in a week), Dead Silver will drop to being only 99 cents. 66% discount! That’s pretty awesome! But, it could go further still …

This is it! The final tier! If One Drink moves more than 500 units (or gets 50 reviews, I suppose) during its sale period, then Dead Silver will become absolutely free for its part of the rolling sale. Yup. FREE.

So what happens then? I’ll set up Dead Silver‘s part in the rolling sale, picking a date in the coming weeks, as well as establishing tiers for the next book in line that Dead Silver‘s sales will impact: Unusual Events: A “Short” Story Collection. And the process starts again. And then again once Unusual Events is on sale. Etc, etc. The sale will roll on!

Want to see Dead Silver and later titles go free? Read, review, and share! Know someone that would enjoy One Drink? Let them know it’ll be free next week. That’s one more unit moved towards bumping Dead Silver to the next tier!

I’ll be posting a ticker in the upper right-hand corner and keeping it up to date so everyone can follow along with the progress thus far. So, get ready … to read!

The finale has arrived!